The Difference Between Fuses and Circuit Breakers | Eck Service 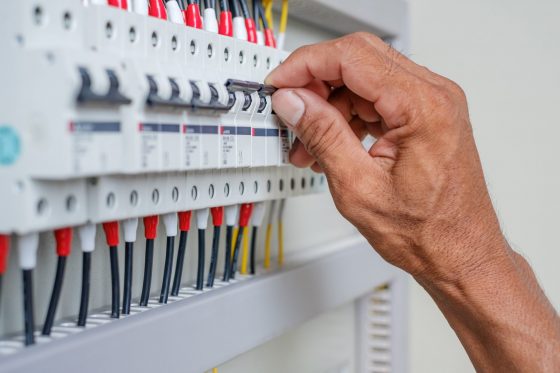 Understanding the Difference Between Fuses and Circuit Breakers

Your home’s electrical system is obviously one of its most essential components. After all, without electricity, you wouldn’t have heating or AC or be able to power any of your appliances. You’d also find yourself being forced to read by candlelight as they did in the old days.

Of course, electricity is also extremely dangerous. Damaged wiring, power surges, short circuits, and other electrical problems can potentially lead to electrocution or start a fire, which is why all modern electrical systems have built-in safety features to lower these risks. Specifically, each circuit in the electrical system is controlled by either a fuse or a circuit breaker, both of which are designed to automatically disconnect the power to a circuit in the event of any electrical issue. Still, if you’re like most people, you’re probably not really sure how fuses and circuit breakers work or what the difference is between the two.

What Do Fuses and Circuit Breakers Do?

Depending on the age of your electrical system, your main electrical panel will contain either fuses or circuit breakers. Although they work slightly differently, they both serve the same purpose. Fuses and circuit breakers act as a safety mechanism that will automatically shut off the current flowing through an individual circuit in order to prevent potential fires and other electrical hazards.

Each electrical circuit in a building can only safely handle a certain electrical load. If the voltage flowing through the circuit is higher than it is designed to handle, it can cause the wires to heat up and potentially catch fire or create an electrocution risk. Fuses and circuit breakers are designed to prevent overheating by instantly switching off the power to that circuit before any damage can occur.

For many years, fuses were the only available option, but this changed once circuit breaker panels began to be introduced in the 1960s. Nowadays, fuses are rarely ever seen and are only found in older homes that have not had any electrical upgrades done. Part of this is that fuse boxes generally can’t handle the higher voltages used by large appliances like dryers. For this reason, most electricians recommend that any home with a fuse box upgrades to a circuit breaker panel. Not only are circuit breakers safer, but they are also far more convenient since you won’t have to replace fuses every time the circuit is tripped.

There are also circuit breakers that use a thin metal strip instead of an electromagnet. In this type of breaker, excess current will cause the metal strip to bend so that the two terminals are no longer connected.

The most common cause of a blown fuse or a tripped circuit breaker is a circuit overload. This occurs when you’re attempting to draw more electricity than the circuit can handle, such as when you have too many things plugged into a circuit. For instance, your TV is probably on a 15-amp circuit. This provides enough electricity to power the TV, but you can quickly overload the circuit if you attempt to use other appliances at the same time.

Short circuits are another issue that will blow the fuse or trip the circuit breaker. This problem occurs when the live electrical wire comes into contact with the neutral wire or anything metal. When this happens, it eliminates the electrical resistance inside the circuit and causes a huge spike in the power flowing through the circuit. This unimpeded flow of electricity can instantly heat up the wiring and potentially lead to a fire if the circuit isn’t disconnected. Short circuits can occur as a result of damaged wiring or loose electrical connections inside an outlet, light switch, or another electrical component in your home. Old, damaged, or faulty appliances can also short circuit and trip the breaker or blow the fuse.

Ground fault surges are a specific type of short circuit that can also cause electricity to flow through the circuit unimpeded. This issue occurs when the live electrical wire touches the bare copper ground wire. It can also occur if water gets inside the electrical box, which creates a risk of electrocution. For this reason, all homes are required to use GFCI outlets (ground fault circuit interrupter) in basements, garages, kitchens, outdoor outlets, and all outlets within 6 feet of a water source. These outlets essentially act as a second circuit breaker and will automatically trigger that outlet to shut off if a ground fault surge occurs.

If you have a circuit breaker that keeps tripping or fuses that blow frequently, the experts at Eck Services are always on hand to help you diagnose and repair whatever electrical issues you’re facing. We are licensed, bonded, and insured and are available 24/7 to handle any emergencies. Our team specializes in electrical panel upgrades, electrical repairs, wiring, lighting, surge protection, and more. We also have a team of highly trained HVAC technicians to meet any of your heating or air conditioning installation, maintenance, and repair needs. If you need pipe repairs, drain cleaning, septic services, or water heater services, we also have a team of professional plumbers for that.

With locations in Kingman, Wichita, Pratt, Hutchinson, and Medicine Lodge, we can serve customers all throughout south-central Kansas. For more information on any of the services we offer or to schedule an appointment, contact Eck Services today.